Excellent Deposit Control
HP Marine is formulated with MAXDOSE™, a system of advanced additives for "super-clean" operation. It helps prevent deposits that lead to poor performance. In field testing, HP Marine inhibited ring deposits that can cause ring sticking and ring jacking (carbon buildup behind the ring, forcing it outward), a phenomenon that occurs in modern DFI outboard motors. It also virtually eliminated exhaust port deposits for reliable, efficient operation.

Proven in Marine E-TEC Field Study
HP Marine was installed in a 250-hp Evinrude E-TEC engine powering a heavy-duty marine rescue vessel. Following a 28-hour break-in period at the normal oil setting, the engine was programmed to its factory-lean setting and operated for 506 hours prior to disassembly. An ASTM calibrated rater examined and awarded each component either a merit rating on a scale of 0 to 10 (with 10 representing no distress) or a percentage rating (with 0 percent representing no distress). Results prove HP Marine provided exceptional wear protection and deposit control. 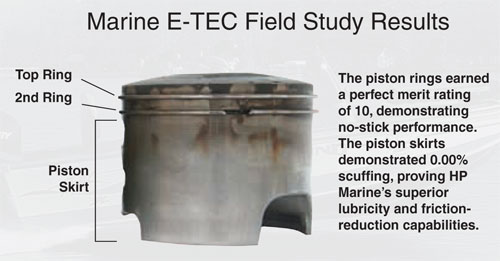 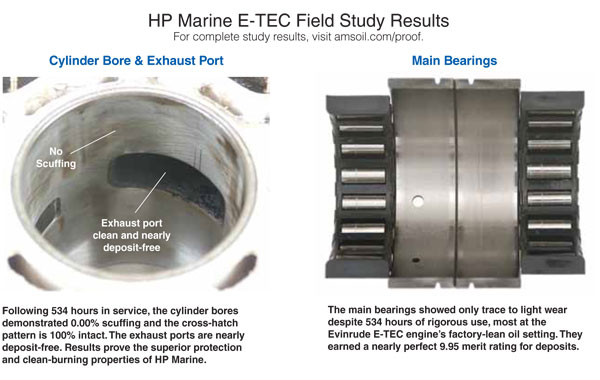 APPLICATIONS
Use in two-stroke marine applications that specify TC-W3, including those made by: Johnson/Evinrude*, FICHT*, E-TEC*, Mercury* EFI & Optimax*, Yamaha*, Nissan*, Tohatsu* TLDI*, Suzuki*, Mariner*, Force*. Use as injection oil or 50:1 premix (2.6 oz. per U.S. gallon of gas).

This product can expose you to Benzene, which is known to the State of California to cause cancer and birth defects or other reproductive harm. For more information go to www.P65Warnings.ca.gov.